Home / Where to Find the Best Meat Masala in India?

Where to Find the Best Meat Masala in India?

Since ancient times, traders from across the globe came to India for spice trade that flourished during ancient and medieval times with many nations. Often referred to as Land of Spices, India has a long history of spices that narrates the evolution of many spices through various regional cuisines. Many spices came into scene and became part of our food and culture.

Spices are soul and essence of food that brings the ingredients to life with their flavours and aroma. India is globally known for the variety of homegrown spices and for its equally popular cuisines with spicy delicacies. Similarly, spice blends were prepared to enhance the flavours of some specific delicacies in regional cuisines. Our discussion today revolves around a spice blend known as Meat Masala, a combination of many spices popularly used as marinade for a variety of meats, especially mutton. Either it is combined with a base like oil or yogurt to prepare a paste that coats the meat or simply rubbed over meat pieces as a dry powder mix.
Ceepee Spices brings a wide range of finest quality spices and blends at your doorstep including perfectly grinded Meat Masala. With authentic flavours and prepared with fresh spices, one can easily buy meat masala online by Cee pee at various platforms including Amazon and Grofers. 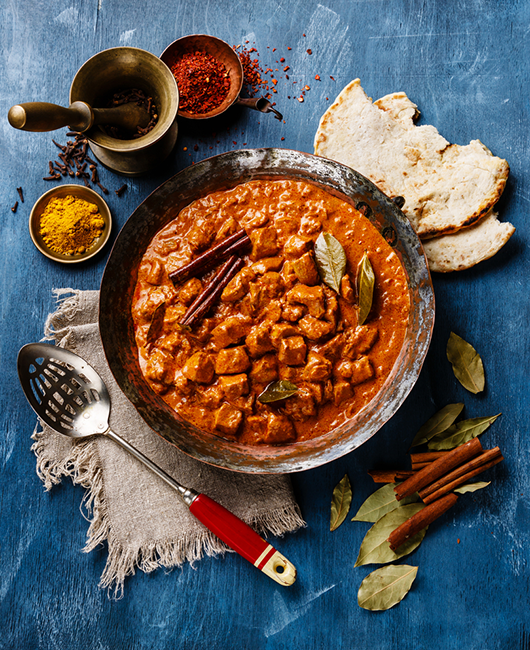 Like all spice blends, the Meat Masala mix also has many variations in recipes that differ with region, culture and every home. The blend from one region may include curry leaves while the combination of spices from other region includes fennel seeds. For instance, meat masala blend from Kerala often contains cardamom, clove, and cinnamon along with fennel seed and nutmeg whereas North Indian version usually includes coriander seeds, bay leaf and cumin seeds.

Apart from changing ingredients, the ratio of spices may also differ depending upon the desired flavour of the masala. Below is the list of common ingredients are used to prepare Meat Masala.

Apart from the Meat Masala blend, there are other ingredients are more than often used to provide a delectable flavour to the meat dishes in India cuisine. Below mentioned is the list of spices, herbs and other ingredients:

Meat Masala Powder is a versatile spice blend that can be used to add a punch of flavours and touch of magic to many delicacies including meat dishes, egg dishes inform of marinade, to impart an oomph factor to gravy or simply to enhance flavours.

Apart from infusing a delectable essence to non-vegetarian dishes, the meat masala also offers a mouth-watering flavour profile to many vegetarian gravy delicacies including paneer, mushroom, potatoes, tofu, cauliflower, daal etc. It can also be used for biryanis and pulao, in case of non-availability of Biryani Masala.

India is often referred to as one of the most vegetarian-friendly country in world; however, it does not come without a scrumptious range of traditional meat dishes. A paradise for meat lovers, the country has its own set of techniques, spice blends and signature dishes that are loved across the globe. From delectable tikkas to buttery chicken and kebabs, the list of dishes is unending as well as delicious. Below is a list of some of the popular and lip-smacking meat dishes that relished by meat lovers around the world.

Tender, delicious and flavoursome, Indian cuisine is packed a vast number of delish meat recipes to choose from. From classic and traditional recipes to fusion delicacies, these dishes capture the essence of various cultures and traditions. With Ceepee’s Meat Masala, it is now an easy task to create the authentic and delightful flavours at home that too at economical price. Prepared with fresh and premium quality spices, it is a best meat masala to bring out the unique flavours.