When you think of comfort food, there is an instant smile on one’s face. Rajma is one such humble north India dish that has a special place in everybody’s heart. Often seen as traditional and staple dish to North India, it is a wholesome, rich and luscious gravy dish with melt in the mouth rajma.

Often served with fluffy rice or soft roti, it serves as a complete meal for vegetarians and is very satiating. It is usually on a menu for every occasion, be it a lazy Sunday lunch or a get together with family and friends.

The Story of Rajma

Rajma Masala is a classic North Indian dish that is loved and eaten with great fondness. However, its key ingredient, the red kidney beans is not originally from India. Native to the Central Mexico and Guatemala to be precise, the beans were brought to India by French and British and the Spaniards and Portuguese took the beans with them to Europe.

With plenty of health benefits, the seeds were a rich source of proteins for sailors and the ships soon carried the kidney bean to Asia and Africa. It forms a special part in the diet of Native Americans. Today, it forms an integral ingredient of many cuisines and is produced commercially on large scale in India, China, the United States, Brazil and Indonesia. 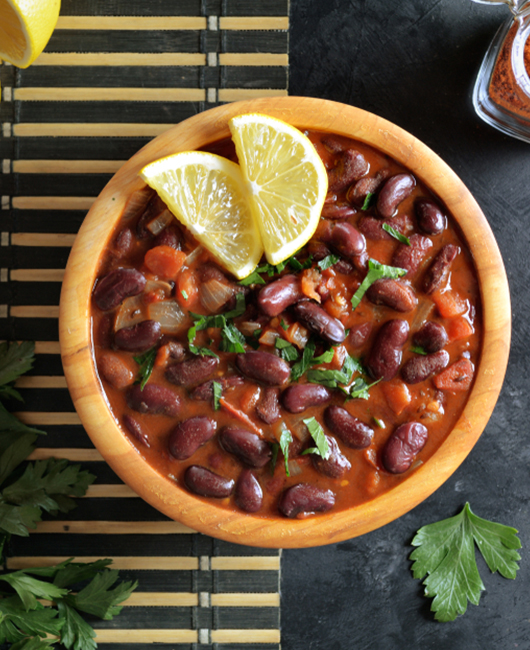 Rajma and its Health Benefits

Although, rajma originally hails from Mexico, but we have whole-heartedly accepted it as an all time favourite dish, at least in North India. However, it is not just the mouth-watering flavour and aroma that has won our hearts but the dish also packs innumerable health benefits. From being a good source of calcium, antioxidants, plant-based protein, vitamins, fibres and minerals, rajma is also known to boost one’s immunity. In addition, following are some more benefits that rajma has to offer.

Rajma is a dish that is revered across India, especially in the North Indian households. The main reason it is so popular and loved is its distinctive and extremely pleasing taste. However, the charm of the dish comes from heavenly blend of spices and herbs that are absorbed wholly in it gravy and kidney beans imparting it a legendry essence. Cee Pee offers the secret to the authentic and delectable flavours of rajma with its Rajma Masala Powder. The blend is created with freshest spices and in right proportion grind to perfect consistency. Following are the list of some of the common ingredients that gives your rajma dish a bag full of flavours.

Here is a list of commonly used ingredients to create this most famous North Indian delicacy, Rajma Masala.

The dish is prepared by soaking the beans overnight before they are boiled in pressure cooker. The boiling helps destroying the toxin called phytohaemagglutinin present in raw kidney beans. Therefore, the adequate pre-boiling process is a vital part of preparing Rajma.

Prepare the tomato paste and add it to the heated ghee in the vessel. Add ginger paste, garlic, green chilli and other spices including Cee Pee rajma masala. Roast the masala well until the ghee separates. Add boiled kidney beans and water. Allow the dish to simmer for a while. Since the kidney beans hold their shape during cooking, they readily absorb the flavours of other ingredients quite well. Simmering the dish makes it more flavoursome. Sprinkle a dash of Cee Pee Garam Masala to enhance the flavours. Garnish it with coriander leaves, drizzle of ghee and ginger julienne. Ensure to buy Rajma Masala online by Cee Pee for the rich and epicurean experience. Each ingredient of the blend is epitome of quality and flavours.