Summers are long gone and bitter cold months of winters are fast approaching. As season changes, so do our diet and palate accordingly and we start to crave different flavours. According to Ayurveda, there are list of food that are termed as “Hot” under Ayruvedic principles. Spices do not only impart good flavours to your food but also are a powerhouse of medicinal values that can help you keep cool in summers and warm this winter. Let’s take a peek at the list of powdered spices that you need to rack up in your kitchen this season.

What are “Hot” Foods in Ayurveda?

Food can be hot or cold based on its physical temperature but in Ayurveda, the food is categorised “Hot” or “Cold” based on the intrinsic nature of the food product. To put it simply, Ayurveda tries to gauge whether a specific food item has a cooling or warming effect inside our body, which in turn has impact on our digestion and metabolism.

Many spices assist in enhancing digestion and that is one of the reasons spices are revered in Ayurvedic culinary. Packed with healing powers, Indian spices powder also add a note of flavours in food. The above category of hot and cold also applies on spices. Spices such as black pepper, ginger and turmeric belong to hot food category that help in providing relief from ailments such as flu and common cold during winter season. Nature is full of surprises and she offers human beings many ways to keep toasty through the cold winters with the help of heat producing, thermogenic spices. 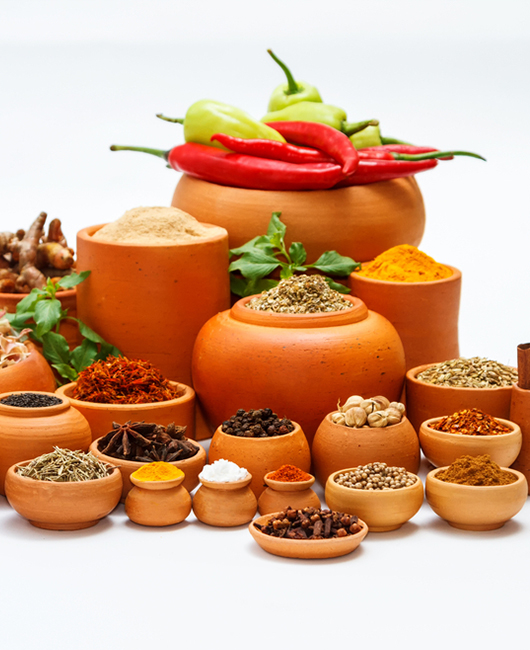 According to Ayurveda, our metabolism needs to work harder in winters to strengthen digestion and assimilate food, which can be done with the help of warming foods and spices to stay healthy and maintain energy levels.

According to the process of Thermogenesis, heat and fuel is produced when body burns calories to utilize food that you have just eaten and thus dissipating energy. Thus, when you consume thermogenic food, the core temperature of our body rises and metabolism speeds up. Spices are some of the best foods to promote the process.

Following is the list of some of the best Indian spices powder offered by Cee Pee that can help you insulate from the cold this season.

Try These Warming Recipes This Winter

Beat the chilly winds this winter with the following recipes and the “Hot” spices for a warming effect.