Home / From Chai to Masala Chai: A Journey of Spices

From Chai to Masala Chai: A Journey of Spices

In India, you do not need a reason or an excuse to drink a cup of tea or chai, you just drink one whenever you feel like. Chai is one such beverage that unites the country of diverse cultures and languages with its sheer love for tea. You will find a tea stall in every nook and corner of Indian streets where discussions on various topics are carried be it politics, sports or bollywood.

Over the years, the beverage has grown from black tea to milk tea with the local recipes and finally made its way to become Masala chai. A special tea beverage originated in India, Masala Chai became popular globally since time immemorial.

What is Masala Chai?

Chai is a beverage that soothes the nerves of million just with its name and fragrance and works it’s magic irrespective of any season or time. When a combination of aromatic herbs and spices is added to the boiling mixture of milk, water and sugar with loose tealeaves, an elixir is created called Masala chai. Originated in India, this ever-evolving drink has undergone many changes over the years. Once devoid of milk, today Masala Chai is brewed and consumed with many variations. It is a delicious thread that weaves conversations over it and so do many cultures and traditions. 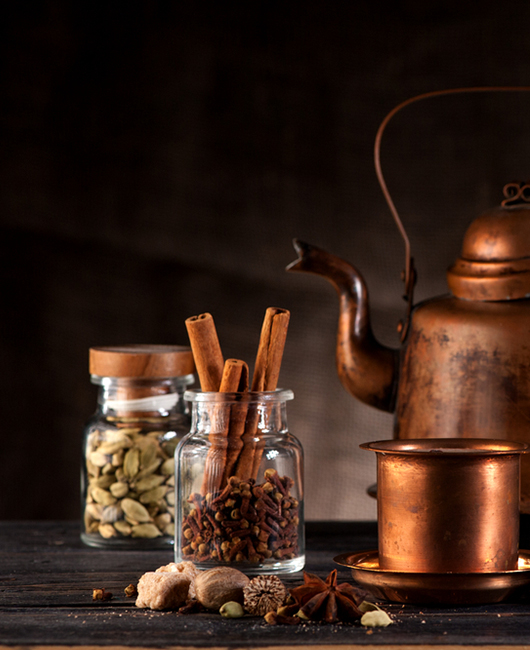 The recipe or preparation of Masala Chai is not fixed. It varies from region to region and household to household across the country. In traditional way, Masala Chai is a spiced beverage brewed with various ratios of warming spices. Sweetener is added in form of sugar or jaggery as per individual taste. Originally, green cardamom and ginger use to be the dominant flavours, however, currently an assortment of many spices are added to give a delectable flavour to this decoction. Ceepee Spices offers Chai Masala online with perfect proportion of ingredients that accentuates the flavours and aroma of this Indian beverage. Following are the combination of spices that takes you on a fragrant tour of Masala Chai.

Ayurveda, an ancient discipline of medical science explains the benefits of the spices used to make chai masala and all the goodness it infuses in the beverage. What else one could ask for than deliciousness packed in a cup of tea and benefitting health. Following are some of the nutritional value bundled in a zesty blend of Chai Masala packet offered by Cee Pee.

Brewing a cup of Masala Chai is not a complicated task in comparison to all the health benefits it holds in it. There is no standard way to make this drink; some prefer it mellow while others strong. For traditional Masala Chai recipe, follow the below mentioned step.

Step 2 – When the water come to a boil, add the content of Chai Masala Packet by Cee Pee.

Step 3 – Boil the blend of spices along with water for 2-3 minutes. Add sugar or any other sweetener according to your taste.

Step 4 – Now add 2 teaspoons of black tea leaves. Boil for another minute. Boil according to the strength of tea you would like to have.

Step 5 – Once you are satisfied with the brew, add ¼ cup milk or as per your taste.

Step 6 – Simmer the mixture for 2-3 minutes after adding milk.

Step 7 – Pour the Masala Chai through strainer directly in to the cup.

To make a perfect cup of aromatic and flavoursome Masala Chai, buy Chai Masala Powder by Cee Pee. Be it a casual get together or a formal gathering; enjoy a perfect evening with friends and family. Take a deep breath and immerse in the pleasure of piping hot cup of Masala Chai, infused with all your favourite spices.