Home / Biryani and the Blend of Spices

Biryani and the Blend of Spices

Quintessential and wholesome meal, Biryani is one such iconic dish that represents royal essence in culinary world in India. Preparing Biryani is an art that requires precision with not much scope for experimentation. However, ever wonder what makes Biryani such a special dish that any celebration or a dinner night is incomplete without it. The signature taste of the Biryani dish comes from the biryani masala used in it. The exotic blend of spices is responsible for its aromatic smell and mouth-watering flavours.

Made with perfect balance of spices and technique that is unique to this delicacy, a balanced combination of Biryani Masala Powder is significant for cooking a perfect pot of Biryani. Adorned with succulent pieces of vegetables or meat, a plateful of this dish invokes our senses with its delightful aroma and tempting preparation. Served at get together or to guests along with vegetable raita, green chutney and masala papad, it makes for a complete meal. Prepare it as main course dish for Sunday lunch or weekend dinner with spicy shorba. Without waiting further, let us take you back in the time to experience the rich essence and flavours of Biryani.

Biryani has always been a wholesome meal satiating hunger with its deliciousness for centuries. Originated in Iran, the Persian introduced the aromatic rice dish to the world. However, Mughal rulers introduced the rice dish in India as Awadh Biryani. Soon it became part of the royal feast in India.

Mostly considered as restaurant dish, it seems like a daunting task to prepare this delicacy at home. A dish that is a delight to eat but a quite a challenge to recreate in present times, a perfect Biryani is an outcome of good quality ingredients, having the suitable equipment’s and knowing the right technique. From Mughal Kitchen to the present times in 21st century, the dish of biryani has gain popularity far and wide. 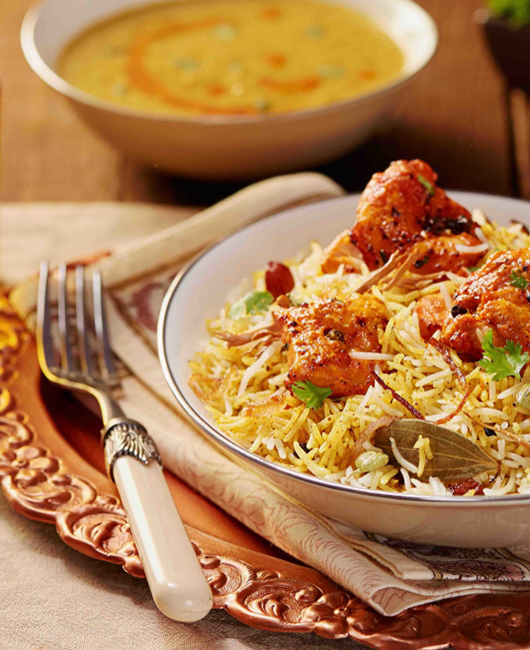 Let us look at what characteristics make a perfect plate of biryani.

Rice Texture – Each grain of rice should be separate and yet slightly sticky and moist at the same time. Overcooked rice becomes and mushy and can spoil the dish. To get the texture right, ensure to use old Bastmati rice. In addition, it is significant to learn the art of cooking perfect half-cooked rice.

Rice Flavour – Biryani is not biryani without the balanced flavours from subtle mix of herbs, spices, sweetness and saltiness. The flavours that remain on your palate after every bite should entice you for one more bite instead of assaulting your senses.

For that exuberant experience, make sure to salt the water in which you boil the rice. Right amount of spice mix plays the most important role. So, whenever you are unsure of quantity, remember lesser the better.

Vegetable or Protein Texture – Every piece of vegetable or protein used should be succulent and moist. Proteins should be tender, non-stringy, and reasonably spiced. Marination is important for softening and imparting flavours to your protein. Marinade for at least 6 hours with minimal ingredients. Try to avoid vegetables like carrot and capsicum and avoid adding too much mint as it can be overpowering.

Types of Biryani in India

Traditionally, Biryani can be categorized in two groups namely Pakki wherein half-cooked rice is coupled with cooked meat and is cooked further and Katchi in which uncooked rice is cooked together with raw mutton pieces marinated in yogurt and spices. However, in country like India where it is difficult to count the number of cuisines on fingers, a delicacy like biryani as well has many versions. Some of the most popular version, which can steal your heart with its rich flavours, includes

Made with blend of many exotic Indian spices, Biryani masala powder consist of spices including coriander, cumin, clove, turmeric, chilli, star anise, black cardamom, nutmeg, cinnamon, mace, black pepper, bay leaf, fennel seeds and green cardamom, each one imparting a special flavour to the dish and adding to its health benefits with its medicinal properties. However, getting the proportion right each time is a hassle. To solve your query, Cee Pee spices brings to you the best Biryani masala that can take you back in the time of Mughals each time you use cook the dish. Prepared with fresh and premium quality whole spices without using any preservatives, you can buy biryani masala online at your own convenience.