Food is an integral part of any culture around the world. However, today we are focusing on the spices from the “Land of Spices” itself, India. Spices have a long cultural as well as medicinal history in the country, which goes back in time.

They have always been a best-kept secret, stored in a special spice box, which holds the key to divine and scrumptious flavours that adorns the dishes of every Indian family, be it royals or a common subject. A wide range of spices, whether whole or ground, can be quiet intimidating aspect about Indian cooking. However, the combinations of spices differ from region to region in India depending upon the cuisine.

With properties and use of each essential spice explained below, we make the challenge a little less daunting for those who love Indian cuisine but afraid to pursue it for its complexity. There are certain spices that are integral part of almost all Indian cuisines and a must have in your kitchen.

Flavour: Warm and earthy with a combination of both sweetness and bitterness

Native to Middle East Asian region, Cumin is a tiny brown seed packed with intense flavour that is characteristically nutty and smoky. Used very frequently in Indian cooking, the spice is used in both whole and in ground form. Currently grown all around the globe, Cumin seeds are commonly used in highly spiced foods and curries featuring in many cuisines. Whole cumin seeds are roasted, tempered with oil, or grinded, and added to food as seasoning, it infuses earthy tones to soups, daals and curries. When added to rice or curd, the aroma is enough to tempt you. For beautiful warm essence, it is best to roast freshly ground the cumin seeds just before use.

Apart from adding punch of flavours to various dishes, cumin also has plenty of health benefits curing diarrhoea and indigestion to morning sickness. Buy the aromatic seeds and other Indian spices online by Cee Pee to enhance your culinary skills. 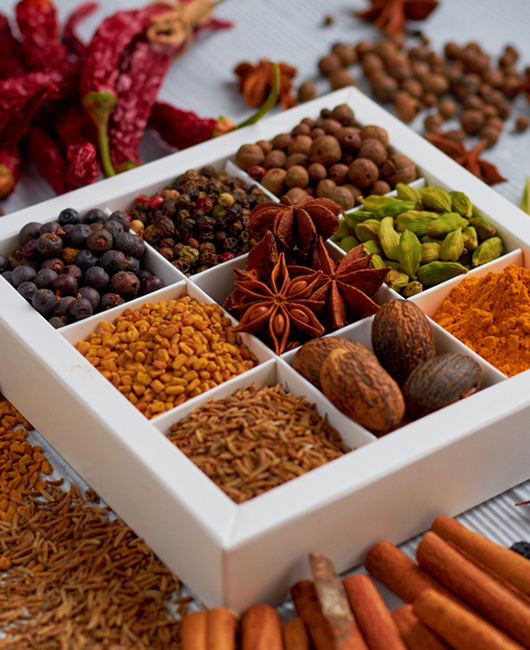 Sweet and aromatic when ripe, Coriander seeds are almost spherical, are characterized by it usually green and brown colour. It is one of the versatile spices in the Indian spice boxes imparting earthy notes to the dishes with a hint of citrus. Whole coriander seeds serves as a base for many spice blends and is one of the most commonly used ground spice in Indian culinary. Like cumin seeds, when dry roasted, coriander seeds pop and dance in pan giving off the essence of earthiness. Add the coriander powder to sambar, rasam dishes, various curries, and dry vegetables for a flavour packed ride. Buy this Indian masala online by Cee Pee for authentic Indian taste.

From Alexander the Great to Mughal aristocracy, hing or asafoetida has been a popular spice since the olden times. Obtained from perennial plant Ferula, Hing is a dark brown resin-like substance with pungent smell. Although not native to India, the spice is integral in Indian cuisine as well as Indian medicines. Hing in form of gum is dried and powdered and is the first thing that goes in to hot oil or ghee while cooking curries, daal or dry vegetables, infusing musky aroma and umami flavours. Just a pinch of it and the aroma is tempting enough to make one hungry. In many cuisines, it acts as a replacement for onion and garlic. A perfect antidote for many health problems, hing comes in compound form containing wheat flower but is also available in pure version.

Flavour: Warm and aromatic with Bitter and woody undertones

Often referred to as “India saffron”, Turmeric is the reason for prominent yellow tint in many Indian, Thai and Asian dishes. One of the most ancient spices, Turmeric is native to South East Asia and is extensively used as a culinary dye and condiment in East and Middle East. It is always used in ground form adding a peppery-woody essence to curries and food. Its medicinal values have been treasured long since antiquity, known for its anti-inflammatory properties and rich in antioxidants. It works as nectar when added to warm milk as well as an integral component of facemasks. This magical spice is available in fresh root form and dried powder form maintaining its deep golden colour and medicinal values.

An Indian spice box is incomplete without the flavourful Kashmiri Red Chilli powder. Although there are many types of red chillies in India but this particular chilli is mild in taste, brilliant red colour with beautiful smoky flavour. It works as a natural food colour with rich flavours that enhance the taste of every dish of any cuisine. Power packed with nutrients, Kahsmiri red chilli or degi mirch offers a basket full of nutrient including vitamin C, antioxidants, minerals, vitamin B complex, vitamin A and more. It also helps in easing indigestion, advances calorie burning and acts as a natural detoxifier.

Now you know about the five essentials of Indian spice box. Along with this list, ensure that a packet of Garam Masala, mustard seeds and Amchur never ends in your pantry. For those who love to cook Indian food, now it is easy to buy these spices. Order Indian spices online in their purest form and premium quality by Cee Pee, a trusted brand for spices.